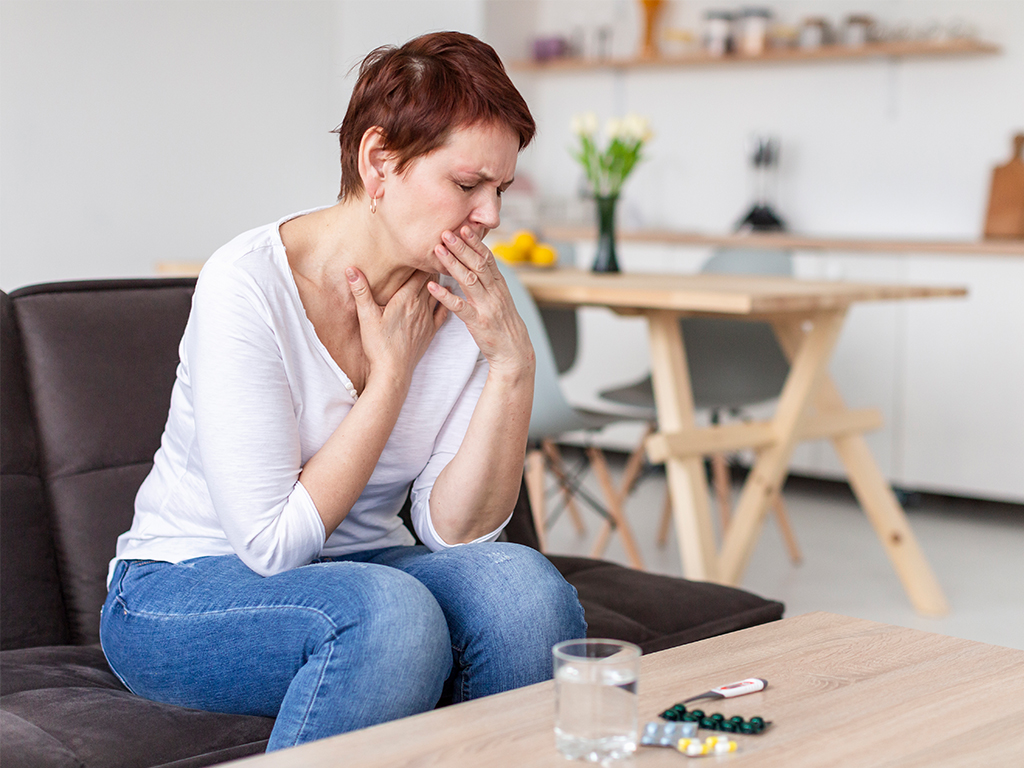 Nasopharyngitis, also known as a cold, is a viral infection of the upper respiratory system that affects the nose and throat. Symptoms include a runny nose, congestion, sneezing, and a sore throat. Treatment is typical with over-the-counter medications and home remedies.

Nasopharyngitis is caused by a virus, such as the common cold virus, rhinovirus, or influenza. The virus spreads through contact with respiratory secretions from an infected person. It can also be spread through contact with contaminated surfaces or objects, such as doorknobs or countertops. Once the virus enters the body, it multiplies in the cells lining the nose and throat. This causes inflammation and swelling of the tissue, which leads to the symptoms of nasopharyngitis.

There are many different viruses that can cause nasopharyngitis, also known as the common cold. These viruses spread easily from person to person, often through coughing or sneezing. Other times, people may touch something that a sick person has touched and then touch their own nose or mouth, which can also spread the virus. Some of the most common cold viruses are rhinoviruses, coronaviruses, and adenoviruses.

The common symptoms of nasopharyngitis, also known as a cold, are a runny or stuffy nose, sneezing, and a sore throat. Other symptoms may include a cough, headache, fever, and body aches. Most people recover from a cold within a week or two. However, some people may experience complications such as pneumonia.

There are many different tests that can be used to diagnose nasopharyngitis. The most common test is a physical examination. This is where the doctor will look for signs of inflammation in the nose and throat. They may also use a stethoscope to listen to your breathing and check for any congestion in your chest.

Other tests that may be used include a CT scan or an MRI. These imaging tests can help to rule out other causes of your symptoms, such as a sinus infection or a tumor. A throat swab may also be done to test for the presence of bacteria or viruses.

The common cold, also known as nasopharyngitis, is a viral infection of the upper respiratory system. The viruses that cause the common cold is spread through the air and can be passed from person to person through coughing and sneezing. The symptoms of the common cold include a runny nose, sore throat, congestion, and sometimes fever. There is no cure for the common cold, but there are things that can be done to treat the symptoms and make the person feel more comfortable.

There are over-the-counter medicines that can be taken for the symptoms of the common cold. These include decongestants for a stuffy nose, cough suppressants to help with coughing, and pain relievers for a sore throat. Drinking plenty of fluids is also important to help thin out mucus and keep the person hydrated.

Nasopharyngitis, more commonly known as a cold, is caused by a viral infection of the upper respiratory system. The best way to prevent nasopharyngitis is to practice good hygiene and avoid close contact with people who are sick.

There are several things you can do to reduce your risk of getting a cold:

-Wash your hands regularly and often, especially before you eat or touch your face.

-Stay away from crowded places during cold and flu season.

-Cover your nose and mouth when you sneeze or cough.

There are several risk factors that can contribute to the development of nasopharyngitis or the common cold. These include exposure to viruses, being in close contact with someone who is sick, and having a weakened immune system. Other risk factors include smoking, living in crowded or dirty conditions, and being under a lot of stress.

Most people will experience at least one episode of nasopharyngitis in their lifetime, and it is generally more common in children and young adults. However, anyone can get the condition, and there are certain groups of people who are more likely to develop severe symptoms. These include infants and young children, older adults, pregnant women, and people with chronic medical conditions such as asthma or diabetes.

Nasopharyngitis, more commonly known as a cold, is a viral infection of the nose and throat. The most common symptoms are a runny nose, congestion, and sneezing. Colds are usually mild and go away on their own within a week or two. However, there are some complications that can occur with a cold, especially if it is not treated properly.

One complication that can occur is sinusitis. This is an inflammation of the sinuses that can cause pain and pressure in the face, as well as a fever. If sinusitis is not treated properly, it can lead to serious infections of the brain or even meningitis.

Another complication that can occur with nasopharyngitis is bronchitis. This is an inflammation of the bronchial tubes that can cause coughing and difficulty breathing.

Nasopharyngitis, also known as a common cold, is usually a mild viral infection of the nose and throat. Most people recover from a cold within a week without needing to see a doctor. However, there are times when it may be necessary to seek medical attention.

If your cold symptoms last longer than a week, you have a fever higher than 102 degrees Fahrenheit, or you develop severe symptoms such as difficulty breathing, consult your doctor. You may also need to see a doctor if you have underlying health conditions that make contracting a cold riskier. These include heart or lung disease, diabetes, and cancer.

If you’re unsure whether or not your symptoms warrant a trip to the doctor’s office, give them a call and explain what’s going on. They can help you decide whether an in-person visit is necessary.

Nasopharyngitis, also known as a cold, is a viral infection of the nose and throat. It is one of the most common illnesses in the world. Symptoms include a runny nose, congestion, sneezing, and a sore throat. Most people with nasopharyngitis recover within a week without any complications. However, some people may develop secondary infections, such as sinusitis or bronchitis. Nasopharyngitis can be prevented by washing your hands frequently and avoiding close contact with people who are sick. Treatment focuses on relieving symptoms.

While nasopharyngitis is unpleasant, it is generally a mild illness from which most people recover quickly.