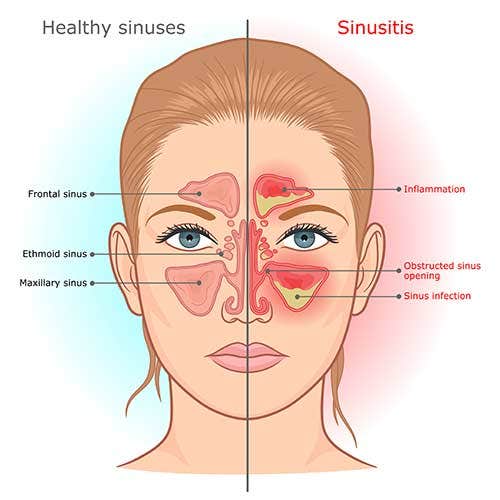 Most sinus infections are caused by a virus. However, other causes include bacteria, allergies, and environmental irritants.

To help prevent sinus infections, it is important to practice good hygiene, avoid allergens, and stay hydrated. If you think you may have a sinus infection, see your doctor for a diagnosis and treatment plan.

There are many risk factors for sinus infections, including allergies, asthma, cigarette smoke, past colds, and nasal polyps. People with weakened immune systems are also at increased risk.

Allergies are a common trigger for sinus infections. Allergies can cause the sinuses to become inflamed and block the drainage of mucus. This can create an environment where bacteria can thrive and cause an infection.

Asthma is another common risk factor for sinus infections. Asthma causes inflammation in the airways, which can lead to blockages in the sinuses. This can make it difficult for mucus to drain properly and allow bacteria to grow.

Past colds are another risk factor for sinus infections. There are many risk factors for sinus infections, and one of them is a history of colds. Cold viruses can damage the sinuses and make them more susceptible to infection. In addition, the inflammation from a cold can block the drainage channels in the sinuses, leading to an accumulation of mucus that provides a fertile ground for bacteria to grow.

A sinus infection, also called sinusitis, is an inflammation of the sinuses. The sinuses are a system of hollow cavities in the bones of the face that open into the nose. Sinus infections can be caused by a virus, bacteria, or fungus and can lead to symptoms such as a runny nose, congestion, facial pain and pressure, headache, cough, and difficulty breathing through the nose. In some cases, a sinus infection can also cause fever, bad breath, and tooth pain. Most sinus infections resolve on their own within two weeks, but some may require antibiotics or other treatment.

A sinus infection, also called sinusitis, is an inflammation of the sinuses. The sinuses are air-filled cavities in the bones around the nose. Sinusitis is usually caused by a viral infection, such as a cold, that spreads to the sinuses. However, it can also be caused by allergies, pollution, or bacterial infection.

The most common symptom of sinusitis is a headache. Other symptoms include a stuffy nose, a runny nose, and pain in the face. If you have these symptoms for more than 10 days, you may have sinusitis.

To diagnose sinusitis, your doctor will ask about your medical history and symptoms. He or she will also do a physical exam. In some cases, your doctor may order a CT scan or MRI to look at your sinuses.

A sinus infection, also called sinusitis, is an inflammation of the sinuses. The sinuses are air-filled cavities in the skull that are connected to the nose. They help to filter out bacteria and other particles from the air we breathe. When these cavities become inflamed, it can cause a buildup of mucus and pressure in the head, which can be very painful.

There are a few different ways that a sinus infection can be treated. One way is by taking antibiotics to kill the bacteria causing the infection. Another way is by using a steroid nasal spray to reduce inflammation. If these methods do not work, there are also surgeries that can be done to improve drainage from the sinuses and reduce inflammation.

There are several things you can do to prevent a sinus infection, or at least reduce your risk of developing one. First, practice good hygiene by washing your hands often and avoiding close contact with people who are sick. You should also avoid irritants like smoke and pollen, which can aggravate the sinuses. Finally, drink plenty of fluids to keep your mucus thin and flowing freely.

Most people with sinus infections can be treated at home with over-the-counter (OTC) medication, but there are some cases where you should see a doctor. If your sinus infection is accompanied by a high fever, facial pain, and swelling, it could be a sign of a more serious infection and you should see a doctor right away. Other warning signs include severe headache, neck pain, or vision problems. If your symptoms last longer than 10 days or if they get worse instead of better, it’s time to seek medical help.

A sinus infection, also called sinusitis, is a condition in which the sinuses become inflamed and swollen. The sinuses are air-filled cavities in the bones of the face. They are located behind the nose, cheeks, and forehead. Sinus infections can be caused by a virus, bacteria, or fungi.

Sinus infections can cause a variety of symptoms, including pain or pressure in the face, headaches, fever, nasal discharge, and difficulty breathing through the nose. Treatment depends on the underlying cause of the infection.