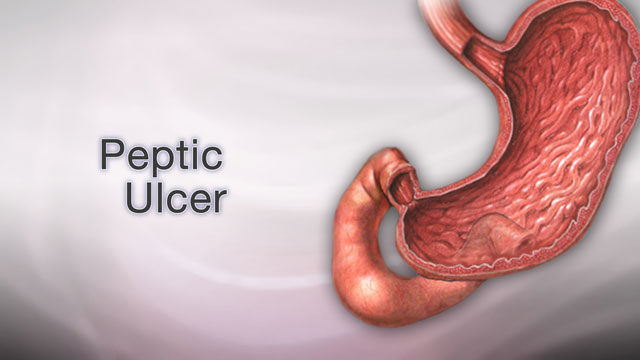 A peptic ulcer is a sore that develops on the lining of the stomach or the first part of the small intestine, called the duodenum. Peptic ulcers can also occur in the esophagus. The most common symptom of a peptic ulcer is abdominal pain.

Peptic ulcers are caused by an infection with the Helicobacter pylori (H. pylori) bacterium, long-term use of nonsteroidal anti-inflammatory drugs (NSAIDs), or injury to the lining of the stomach or duodenum. Treatment for peptic ulcers depends on the cause. If H. pylori are present, antibiotics are used to kill the bacteria and prevent further damage to the stomach lining. NSAID users may be advised to switch to another type of pain reliever or may be given a medication to protect their stomach lining.

A peptic ulcer is a sore that develops on the lining of the stomach or the upper part of the small intestine. The most common cause of peptic ulcers is an infection with a bacterium called Helicobacter pylori. Other factors that can contribute to the development of peptic ulcers include:

-Nonsteroidal anti-inflammatory drugs (NSAIDs), such as ibuprofen and aspirin.

Peptic ulcers are sores that form in the lining of the stomach or upper part of the small intestine. The most common symptom of a peptic ulcer is abdominal pain, which can range from mild to severe. Other symptoms may include nausea, vomiting, bloating, and indigestion.

Peptic ulcers are diagnosed through a variety of tests. The most common diagnostic test is an upper gastrointestinal (UGI) series. This test uses x-rays to take pictures of the stomach and small intestine. Another common diagnostic test is endoscopy. This test uses a long, flexible tube with a light and camera on the end to look inside the stomach. A biopsy may also be done during endoscopy. This involves taking a small sample of tissue from the stomach lining to be examined under a microscope.

There are several different options for treating peptic ulcers. Some of the most common include:

1) Antibiotics: These are often prescribed to help kill the bacteria that may be causing the ulcer.

2) Acid-reducing medications: These can help to lower the amount of acid in the stomach, which can help to reduce pain and inflammation.

3) Protective agents: These can help to coat the stomach and protect it from further damage.

4) Surgery: In some cases, surgery may be necessary to remove the ulcer or repair any damage that has been done.

NSAID-related ulcers may improve with a different type of pain reliever or by stopping NSAID use altogether. Other treatments for peptic ulcers include antacids and proton pump inhibitors (PPIs).

To prevent peptic ulcers, avoid spicy, fatty, and acidic foods. Don’t smoke or drink alcohol. If you take NSAIDs regularly, ask your doctor if you can take a different pain reliever. Stress can make ulcers worse, so try to relax.

Bleeding from a peptic ulcer can be mild or severe. Mild bleeding may cause black stools or coffee ground-like vomit. Severe bleeding can lead to anemia, shock, and death. Perforation occurs when the ulcer erodes through the stomach or small intestine wall. This is a serious complication that requires immediate surgery. Infection can occur if the ulcer is left untreated. Obstruction occurs when the ulcer blocks the passage of food through the digestive tract.

If you have been experiencing any of the following symptoms for more than a week, it is time to see a doctor for your peptic ulcer:

– abdominal pain that is relieved by eating or taking antacids

– dark stools or blood in vomit

Early diagnosis and treatment are essential for peptic ulcers. Left untreated, peptic ulcers can lead to serious complications, such as bleeding, perforation (a hole in the lining of the stomach), or obstruction (blockage).