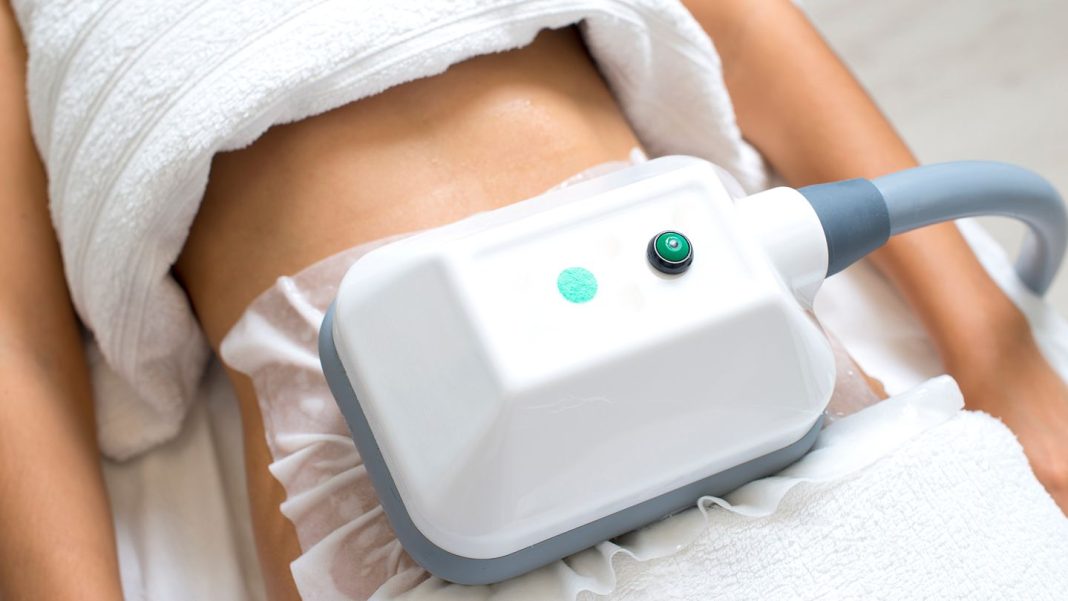 CoolSculpting is a non-invasive FDA-cleared body contouring treatment that uses cryolipolysis, to target and eliminate stubborn pockets of fat.

The CoolSculpting procedure uses a handheld device to deliver controlled cooling to the treatment area. The device targets and freezes fat cells beneath the skin, without damaging the skin’s surface.

After the procedure, the frozen fat cells are eliminated from the body through natural metabolic processes. CoolSculpting results are visible within three weeks and typically reach their full extent after two months.

How does CoolSculpting work?

CoolSculpting is a non-invasive, fat-reduction procedure that uses controlled cooling to eliminate stubborn fat that resists all diet and exercise. The results are proven, noticeable, and lasting—so you’ll look great from every angle.

So how does CoolSculpting work? CoolSculpting technology safely delivers precisely controlled cooling to gently and effectively target the fat cells underneath the skin. Treated fat cells are crystallized (frozen), then die. Over time, your body naturally processes the fat and eliminates these dead cells, leaving a more sculpted you.

If you’re considering the CoolSculpting procedure, you’re in good company. The non-invasive fat-reduction treatment is FDA-cleared, safe, and effective. More than 7 million CoolSculpting treatments have been performed worldwide.

During a CoolSculpting procedure, controlled cooling is applied to the area to freeze fat cells. The treated fat cells are crystallized and then die. Over time, your body naturally processes the fat and eliminates these dead cells.

CoolSculpting results are long-term, and you may start to see results as soon as three weeks after your treatment. The most dramatic results are usually seen after about two months.

The benefits of CoolSculpting

CoolSculpting is a non-invasive, FDA-cleared procedure that uses cryolipolysis, or fat-freezing technology, to target and eliminate stubborn pockets of fat. The CoolSculpting treatment is safe and effective for both men and women who are looking for a way to sculpt their bodies without surgery or downtime.

Some of the benefits of CoolSculpting include:

1. Safe and Effective: The CoolSculpting treatment is FDA-cleared and clinically proven to be safe and effective. It uses controlled cooling to target and eliminates fat cells, with no surgery or downtime required.

2. Non-Invasive: The CoolSculpting procedure is non-invasive, meaning there are no needles or incisions required. The procedure is also performed without a general anesthetic, which means people can return to their normal activities immediately.

3. Focused: CoolSculpting provides a focused and effective way to target the fat in problem areas.

The risks or side effects

Yes, there are some risks associated with CoolSculpting. The most common side effects are temporary numbness, redness, swelling, bruising, and firmness. These side effects typically resolve within a few weeks. Some rarer side effects may include skin irritation, pain, tingling, and discomfort. Overall, CoolSculpting is considered a safe and effective treatment for reducing fat.

The cost of CoolSculpting

If you’re considering CoolSculpting, you’re probably wondering how much it costs. The short answer is that CoolSculpting prices vary depending on the number of treatments you need and the size of the treatment area.

CoolSculpting is not a one-size-fits-all procedure, so the number of treatments you need will depend on your goals. Most people need two to four treatments to see noticeable results. The larger the treatment area, the more treatments you’ll need.

As for CoolSculpting cost per treatment, prices start at $700 and can go up to $1,500 per session. So, if you’re looking at getting four treatments for a large treatment area, you can expect to pay between $2,800 and $6,000 in total.

CoolSculpting is a popular non-invasive fat-reduction procedure. But how effective is it?

A study published in the Journal of Cosmetic Dermatology found that CoolSculpting was effective in reducing fat thickness in treated areas by an average of 21 percent after just one treatment.

Another study, this one published in the Laser Therapy journal, found that CoolSculpting was effective in reducing the subcutaneous fat thickness by up to 25 percent after just two treatments.

So it seems that CoolSculpting can be quite effective in reducing unwanted fat. However, it’s important to note that the results are not permanent and you may need to have additional treatments to maintain your results.

Coolsculpting is a great way to remove unwanted fat from your body without having to go through surgery. The results are permanent and there is no downtime, which makes it a great option for those who want to improve their appearance. However, it is important to remember that Coolsculpting is not a weight loss solution, and you will still need to maintain a healthy lifestyle in order to keep the fat off for good.