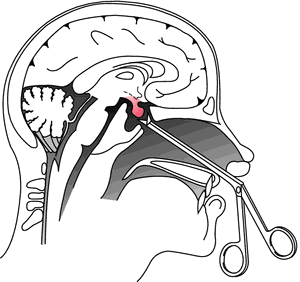 Hypophysectomy is the surgical removal of the pituitary gland. The pituitary gland is located at the base of the brain just below the hypothalamus. It produces hormones that regulate many body functions, including growth, metabolism, and reproduction.

The most common reason for hypophysectomy is to treat a tumor of the pituitary gland. These tumors can secrete excess hormones, resulting in disorders such as Cushing’s disease and acromegaly. Hypophysectomy may also be done to remove a non-cancerous tumor or to relieve pressure on the optic nerves (the nerves that carry visual information from the eyes to the brain).

In most cases, hypophysectomy is performed through an incision in the nostril (endonasal approach). The surgeon removes the pituitary gland through this opening.

Transsphenoidal hypophysectomy is the most common type of hypophysectomy. It is a minimally invasive procedure that is performed through the nose. The surgeon accesses the pituitary gland through the sphenoid sinus, which is located behind the nose. This type of surgery has a low risk of complications and a short recovery time.

An open craniotomy is a more invasive type of surgery that involves making an incision in the skull. The surgeon accesses the pituitary gland through this opening in the skull. This procedure may be recommended for tumors that are not accessible through transsphenoidal hypophysectomy.

Stereotactic radiosurgery uses a high dose of radiation to destroy the pituitary gland. This surgical procedure may be recommended for tumors that are not accessible through transsphenoidal hypophysectomy.

Hypophysectomy is a surgical procedure to remove the pituitary gland. The surgery is typically performed through the nose using an endoscope, which is a thin, flexible tube with a light and camera attached. Surgeons may also use an open approach, which involves making an incision in the skull.

Hypophysectomy is the surgical removal of the pituitary gland. This gland is located at the base of the brain and produces many important hormones, including growth hormone and thyroid-stimulating hormone.

Hypophysectomy is usually performed to treat a tumor of the pituitary gland. These tumors can be benign (noncancerous) or malignant (cancerous). In some cases, hypophysectomy may also be done to treat Cushing’s disease, acromegaly, or gigantism.

There are several potential benefits of hypophysectomy. First, it can often cure Cushing’s disease and acromegaly. Second, it can shrink or eliminate a pituitary tumor. Third, it can relieve pressure on the optic nerves, which can improve vision in people with certain types of pituitary tumors.

Hypophysectomy is major surgery with several risks. The most common complication is diabetes insipidus, which occurs when the pituitary gland can no longer regulate the body’s water balance. This can lead to excessive thirst and urination. Other risks include infection, bleeding, and damage to nearby structures.

After hypophysectomy, the recovery process can vary depending on the individual. For some people, the recovery is fairly quick and they are able to return to their normal activities within a few weeks. Others may take longer to recover, especially if they had a more invasive procedure. The most important thing during recovery is to follow your doctor’s orders and take it easy. You may need to take some time off from work or school and avoid strenuous activity. Most people are able to resume their normal activities within a few months.

Hypophysectomy is a surgery to remove the pituitary gland. This gland is located at the base of the brain and produces hormones that regulate many body functions. The most common reason for this surgery is to treat a pituitary tumor.

Pituitary tumors are usually benign but can grow and press on surrounding structures. They can also secrete excess hormones, which can lead to serious health problems. In some cases, medications can be used to shrink the tumor, but surgery is often the best option.

During hypophysectomy, the surgeon will access the pituitary gland through an incision in the nose or skull. The gland is then removed or destroyed. This surgery carries risks, but it is usually successful in treating pituitary tumors.